As he plummeted 24 miles to Earth at a speed of 833 mph, Felix Baumgartner went into an uncontrollable “death spin”. To make matters worse he couldn’t see, because his visor was covered in condensation. 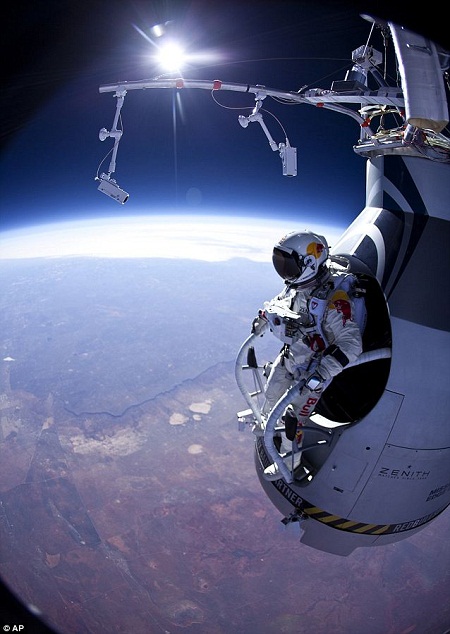 In the months leading up to the record breaking jump, Baumgartner had suffered considerable anxiety and kept rehearsing the myriad of gruesome ways in which he could die including,

In the weeks leading up to the jump, Baumgartner was coached by leading sports psychologist Dr. Michael Gervais, who used guided meditation and visualisation to install new mental imagery, dissolve anxiety and enhance Baumgartner’s ability to focus on the moment and perform under pressure.

Gervais says, “We all have inside us what we need to fulfil our potential. We just need to master our craft, let go of the outcome and trust ourselves to make the right decision in each moment.”

After the jump, Dr. Andy Walshe, Head of Red Bull’s High Performance division was asked, “What are the limits of human potential?” Walshe replied, “We have some amazing talent in all our Red Bull teams, but I’ve yet to meet anyone who has the consciousness of the Dalia Lama, the creativity of Steve Jobs, and the ability to perform under pressure like a Special Forces commando. We’ve only just scratched the surface of human potential.”

Extensive research by Walshe’s team shows that whether it’s in the boxing ring, the boardroom or jumping from a 24-mile high balloon, there is one fundamental concept that underpins all peak performance:

The mind is at rest when the body is in action.

May you RIP – Rest In Presence.

A man died and went to Heaven. As he stood in front of the Pearly Gates, he saw a huge wall with clocks on it. He asked, “Why have you got so many clocks?”

“Those are Lie-Clocks,” replied St. Peter. “Everyone who has ever been on earth has a Lie-Clock. Every time you lie, the hands on your clock move.”

“Incredible”, said the man. “And whose clock is that one?”

“Have you got a clock for Lance Armstrong?” asked the man.

St Peter replied, “We’re using it as a ceiling fan.”

Although we're only born with two fears – the fear of falling and the fear of loud noises – research... END_OF_DOCUMENT_TOKEN_TO_BE_REPLACED

Whilst on holiday in the US I got chatting to an old Kentucky farmer named Bo who told me, "Never... END_OF_DOCUMENT_TOKEN_TO_BE_REPLACED

Business growth is just what it sounds like. When a business gains a certain amount of success, it will subsequently... END_OF_DOCUMENT_TOKEN_TO_BE_REPLACED